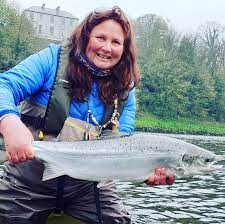 Glenda began fishing at the age of nine on her local River Inler in Comber, Northern Ireland. She left home at 18 years old and moved to Scotland telling her parents that she was going to fish and teach fishing for the rest of her life.

Glenda first qualified as a fly casting instructor in Scotland when she was only 19. She fished in the Scottish Ladies International Flyfishing team, and went on to manage the Irish Ladies team. 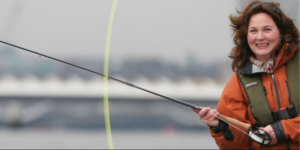 Glenda became a World Champion in 2006 when she won the Overhead Salmon Distance Casting Competition for women at Carton House.

An avid fisher, Glenda is a natural teacher with a gentle approach to helping people through some of the more difficult steps on the way to becoming a proficient caster.

She is one of the highest qualified salmon fly casting instructors in the world having achieved the APGAI-Ireland both Double (salmon) and Single handed certifications to the highest levels.

Dedicated to everything that's great about being out on the water. From boating, angling, surfing, kayaking, swimming and much more! We look forward to seeing you in 2023

Manage Cookie Consent
We use cookies on our website to give you the most relevant experience by remembering your preferences and repeat visits. By clicking "Accept all", you consent to the use of ALL the cookies. However, you may click "Preferences" to provide a controlled consent.
Manage options Manage services Manage vendors Read more about these purposes
Preferences
{title} {title} {title}